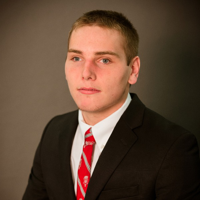 Multi-faceted agitating forward with a goal scorer's touch and a grinder's grit...one-time USHL Forward of the Week (2/8/16) following his first career hat trick and five points in two games...scored 10 of his 14 goals in the 2016 calendar year...one of nine double-digit goal scorers...unafraid to drop the mitts or get physical (126 PIMs)...scored the game-winning overtime goal in Game 2 of the Eastern Conference Semifinal in Green Bay...center of the named "Coneheads" line along with teammates Colin Theisen and Zach Solow...committed to Minnesota State-Mankato