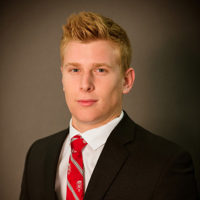 Opportunistic goal scorer with a wicked half-slap shot...scored his first USHL goal in his first game, on his first shot (9/26/15 vs. Madison)...added three goals in his final five games of the season...served a brief stint with the Coulee Region Chill (NAHL) in January, and added 5 points in 6 games...after returning, notched 6 goals and 2 assists in the following 9 games...one of nine double-digit goal scorers in 15-16...added 4 assists in the playoffs...committed to Dartmouth College