In 1980, the Dubuque Fighting Saints were born. Hockey was brought to The Key City by Jack Barzee, who moved the original rendition of the Waterloo Black Hawks across the state of Iowa to the Five Flags Center. Dubuque's new team played in the United States Hockey League, were the talk of the town, and had instant success under the leadership of Barzee. During his tenure as Head Coach/GM, the Fighting Saints compiled a 156-80-4 record, two national championships, three playoff titles and two regular season crowns. The club's inaugural season saw Dubuque earn the Anderson Cup as league champions, the Clark Cup as playoff champions, and a National Title. The "Bull Dog Line" Mike Carlson, Dean Thomas and Brian Collins shattered USHL scoring records.
Barzee's 1983 national championship team featured Gary Suter as team captain. Suter would on to enjoy a 17-year NHL career, which included two appearances on the Olympic team and a Stanley Cup championship. The 1984-1985 team brought another Clark Cup title to Dubuque. 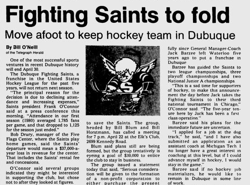 Barzee's last season in Dubuque was the 1984-1985 campaign, and that season was also nearly the team's last in Dubuque. In April 1985, it was announced that the Fighting Saints would fold later that month. The community quickly acted to keep the team and a "Save Our Saints" campaign began. Led by President Bill Blum and an executive board, and the likes of key supporters such as Theodore Scherr, the organization raised the needed funds within weeks to purchase the team and keep them in Dubuque.
Following Barzee's departure, the team was able to win 25 and 27 games respectively in the next two seasons. However, the 1987-1988 season was the beginning of several years of struggles on the ice for the Fighting Saints. The team won just six games that year, seven the year following, and eight during the 1989-1990 season.

The early 1990s saw the Fighting Saints add red to their color scheme and a new look, and a new coach, helped return bring another National Championship to Dubuque. In the 1990-1991 season, Dubuque got a pair of top prospects in the Ferraro twins, Chris and Peter. The two helped Dubuque to 22 wins that season. The following year, Cary Eades took over behind the bench. During the 1992-1993 season, Eades' club, led by future NHL forward Landon Wilson, would advance to the National Tournament in Indianapolis. There, the Fighting Saints topped the Kalamazoo Jr. K-Wings, 9-7, to return Dubuque to glory. 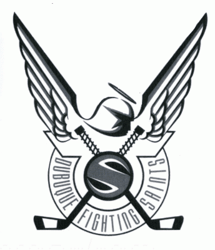 Eades departed the team following the National Championship season, and after a successful stint by Troy Ward behind the bench, Dubuque struggled, and the team failed to keep a coach for an entire season the next three years. In 1996, Brian Gallagher purchased the team. He would wind up moving behind the bench during the 1997-1998 season, first on an interim basis, but he would remain the Fighting Saints coach until 2001.
A new millennium saw Dubuque move away from their trademark cherub logo, to a new futuristic look. The Fighting Saints continued to advance many players to the NCAA and professional ranks, but were only able to qualify for the playoffs once in the team's final seven seasons.
In 2001, citing low attendance and rising costs, Gallagher announced the team would be moving following the 2000-2001 season to Tulsa, Oklahoma. The team was named the Tulsa Crude, and lasted only one season before folding. 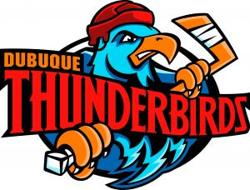 Following the announcement of the Fighting Saints departure, Dubuque did not waste anytime courting a new team. The city was able to keep junior hockey in the Tri-State area with the new Dubuque Thunderbirds. The team would play in the "Junior B" Minnesota Junior Hockey League and still called the Five Flags Center home. The Thunderbirds set league best attendance marks, and were league champions in 2004.
In 2006, the Fighting Saints moved to the Central States Hockey League and brought Dubuque a string of success not seen since the early days of the Fighting Saints. As a CSHL team, Dubuque went 97-1-1-1 at the Five Flags Center, and won the league's Hurster Cup in 2007, 2008 and 2009.

A new arena was in the works for Dubuque, and with the city proving its love for junior hockey, a return for the USHL to Dubuque became possible. Local Iowan investors Mark Falb and Dr. David Field, M.D., the owners of the Thunderbirds, partnered with Philip Falcone, Mark Falcone, Brad Kwong and current senior advisor for the St. Louis Blues, Peter Chiarelli to form Northern Lights Hockey, LLC, which would eventually bring a new USHL team to Dubuque. In addition to Chiarelli's ties to the Boston Bruins, Philip Falcone is the former part owner of the NHL's Minnesota Wild. Philip Falcone, Brad Kwong and Peter Chiarelli all played hockey together at Harvard University, and Mark Falcone played at the University of Denver.

In November of 2009, it was officially announced that Dubuque was returning to the USHL for the 2010-2011 season. The club would play at the soon-to-be constructed Mystique Community Ice Center that would seat 3,079 and be located on the Chaplin-Schmitt Memorial Island.

Few teams can boast the success the Fighting Saints have had during their first ten seasons back in the USHL. The club won the Clark Cup in its first season in 2011. In 2012–2013, Dubuque posted a franchise best 45-11-8 mark, winning the league's regular season title, the Anderson Cup, for the first time in 30 years. Dubuque also captured the Clark Cup that season on an overtime goal by Frankie DiChiara.

In 2013, the team represented the United States at the Junior Club World Cup in Omsk, Russia. The team topped the hometown Omsk Hawks 6-4 to advance to the medal round. The Fighting Saints brought home a Bronze Medal with a victory of Dynamo-Shinnik from Belarus.

The 2013–2014 season saw Dubuque average a franchise best 2,606 fans per game. The team also qualified for the playoffs for a fourth straight season, under the direction of new Head Coach Matt Shaw, who took over for Montgomery after he took the Head Coach position at the University of Denver.

Along with Montgomery, many Fighting Saints have advanced to the next level. Over 180 former Fighting Saints have played or are playing NCAA hockey and the club has also already graduated several players to the NHL in Zemgus Girgensons, Johnny Gaudreau, Mike Matheson, Matt Benning, and many others.
On January 13, 2015, the Fighting Saints and the City of Dubuque hosted the 2015 USHL/NHL Top Prospects Game. The big event saw over 3,000 fans pack the Mystique Community Ice Center, and scouts from all 30 NHL Teams were on hand to watch the next crop of NHL stars.

The 2014–2015 season saw Dubuque claim a third Dupaco Cowbell Cup as the elite team in Eastern Iowa. Dubuque made the playoffs for a fifth straight year, making them the only team in the USHL to accomplish this feat. The Fighting Saints advanced to the Conference Finals for a third straight season before falling to Muskegon in five games.
2015–16 marked the first season under the direction of new head coach Jason Lammers, and the tradition of excellence continued with a new face behind the bench. As the third seed in the Eastern Conference playoff picture, the Fighting Saints rolled to a third Clark Cup Final berth in the past six seasons. They would eventually fall to the Tri-City Storm, the Western Conference's top seed.
Lammers' final season behind the bench, 2016–17, saw just five returners from the prior season lead the way to a berth into the Clark Cup playoffs for an unprecedented seventh season, and for six out of the seven seasons, the Saints made it to the Eastern Conference Final.
The 2017–18 season was a year of transition, as, with the departure of Lammers to Niagara University, led to the ushering in of former longtime assistant coach Oliver David as head coach. He led the team to an eighth-consecutive playoff berth with a 26-21-13 record, and the Saints won at least one round in the playoffs for the eighth consecutive season as well with a win over the Green Bay Gamblers in the first round.
A transition in ownership came along during the offseason, as legendary alumni Johnny Gaudreau and Zemgus Girgensons, along with hockey business veteran Peter Luukko and Stanley Cup Champion head coach Dan Bylsma joined a host of successful businessmen and investors to join the ownership group through Northern Lights Hockey, LLC, and will look to continue the already established tradition of excellence that the Fighting Saints name has been known for since the beginning.
During the 2018–19 season, the Fighting Saints traversed another year of up and downs to once again make the playoffs. The season marked the ninth straight year that Dubuque made the postseason and in beating the Youngstown Phantoms in the first round, also ensured that Dubuque would claim at least one playoff series victory for the ninth straight season as well. Dubuque saw one of the finest individual performances in team history during the year as Matias Maccelli recorded 72 points, tying Erik Haula's USHL record for a Finnish-born player.
Despite the 2019–20 season being cut short due to COVID-19, the Saints still featured a record breaking team. Dubuque finished with their second highest winning percentage in Tier-1 history, going 33-13-2 in 48 games. Riese Gaber cemented his place as the franchises leading goal scorer, with 56 in his career. The season culminated with an impressive collection of awards for Dubuque. Riese Gaber became the first player in team history to win USHL Player of the Year. Gaber was also named USHL Forward of the Year. Erik Portillo was named the USHL Goalie of the Year and Oliver David was named USHL Coach of the Year. Both awards were the first of their kind for Dubuque. Kalle Larsson was awarded USHL GM of the Year and Dubuque had five players named to All-USHL teams.
The USHL brought on a tremendous undertaking out of the COVID-19 pandemic and rolled out plans to play a slightly shortened season for 2020–21. The Fighting Saints ran into an immediate obstacle. The Coronavirus struck the team right out of the gate, and the team stumbled to a 1-10-0 mark after eleven games. The team rallied behind a set of savvy moves to bring in LA Kings prospect Lukas Parik, and 2022 top prospect Matt Savoie. From there, the team went 23-13-5 to close out the year, and made the Clark Cup playoffs once again, continuing the longest playoff streak in the USHL.

The Dubuque Fighting Saints had a changing of the guard at the head coaching position following the conclusion of the 2020–21 season. Oliver David, who had served in the role for four seasons, moved on to an opportunity with EHC Biel-Bienne in the top league in Switzerland, opening the door to a new era behind the bench of the Fighting Saints.