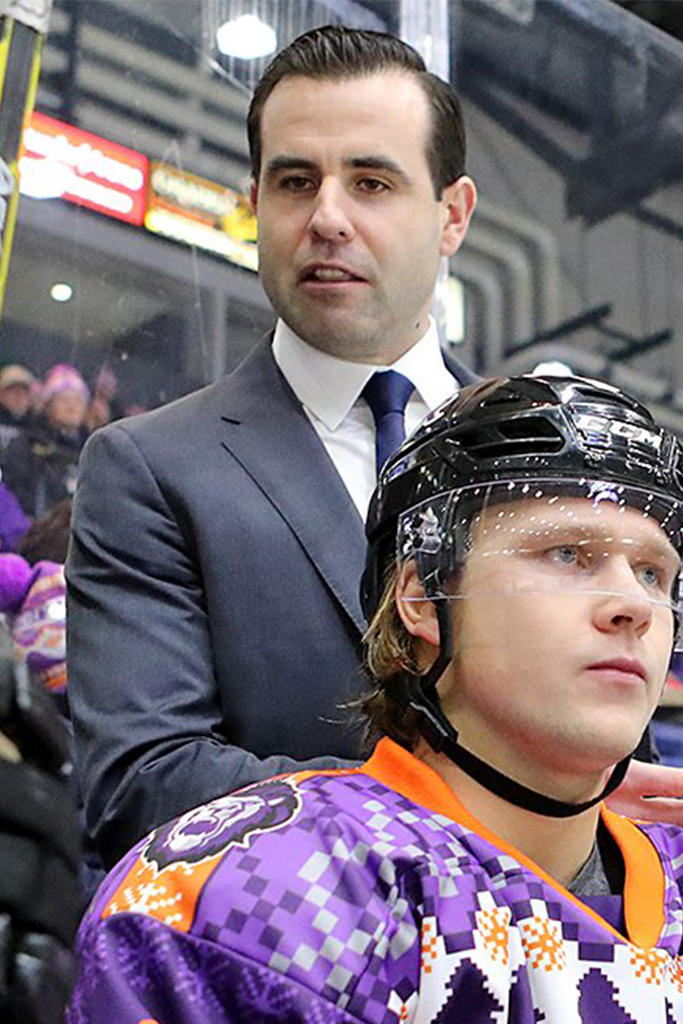 Kirk MacDonald was named the sixth head coach in the organization's Tier I history on June 13, 2022. He joined the Fighting Saints from the Reading Royals of the ECHL.

MacDonald was an assistant coach with Reading for the first three years of his pro coaching career, and then took the mantle of the head coaching job as an interim head coach to end the 2016–17 season. He was then tabbed with the official position of head coach and director of hockey operations from the start of the 2017–18 season onward. As a head coach, he led the Royals to a 158-86-34 regular season record. Most recently, the Royals finished first place in the North Division with a 45-17-9 record, and a +57 goal differential.

His coaching career began immediately after retiring from pro hockey in 2013. MacDonald returned to his alma mater, Rensselaer Polytechnic Institute (R.P.I.) as an assistant coach for the 2013–14 season. There, he coached former Fighting Saints Luke Curadi and Milos Bubela.

As a player, Kirk MacDonald was a consistent source of offense, whether it was at the NCAA level at R.P.I., the ECHL level with the Florida Everblades or with Reading, and at the AHL level with the Albany River Rats, the Providence Bruins, the Iowa Chops and the Houston Aeros. In ten seasons as a professional hockey player, MacDonald scored 96 goals and 121 assists in 406 games.

The culmination of a long career came during the 2012–13 season, his final season as a pro, where he won the Kelly Cup with the Royals. During that run, he scored a shorthanded game-winning goal in a decisive Game 5 against the Cincinnati Cyclones that led the team to the final round to face off against the Stockton Thunder.

MacDonald prepped for his long pro career as a stalwart hockey player at R.P.I. His senior season saw him earn many accolades as captain of the team, including the 2007 Rensselaer Alumni Association Community Service Award, the USCHO.com Unsung Hero Award, R.P.I. Most Inspirational Award, be named a Coca-Cola Community All-American, and be a 2007 Hockey Humanitarian finalist and a Lowe’s Senior CLASS Award finalist. He scored 103 points in 137 games as a member of the Engineers.

MacDonald has been an outspoken advocate for cancer research and support as a cancer survivor himself. Through a grueling recovery from testicular cancer and a two month-long stay in the hospital back in 2005, he has been cancer-free since and has been a beacon of support in every community he has lived in for cancer-related causes. He represented the Royals at the Real Men Wear Pink event which benefitted the American Cancer Society of Berks County, and was a celebrity bartender to raise money for Hockey Fights Cancer and the American Cancer Society. 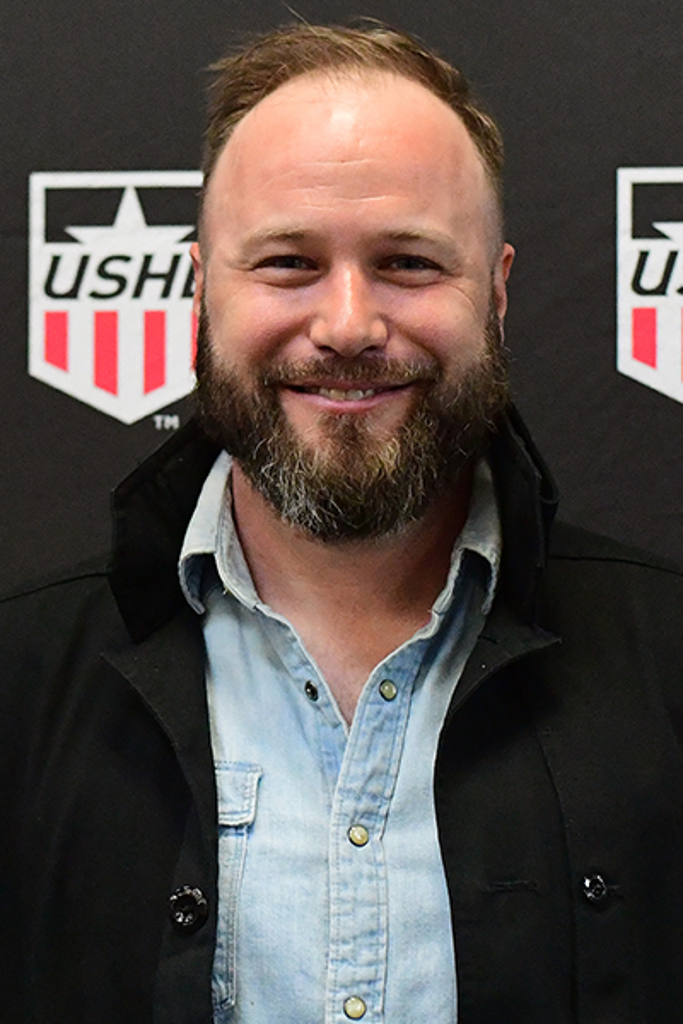 Kalle Larsson first joined the Fighting Saints in August of 2015 as the Director of Player Personnel. Since then, he has risen up the ranks and become the President of Hockey Operations & General Manager of the organization. As GM, he oversees all aspects of hockey operations and makes all hockey personnel decisions. Larsson served as USHL GM Chair for three years (2019–2021), is a current GM representative of the USHL's Competition Committee, and an active member of the league's Return to Play COVID Task Force.

Larsson has cultivated strong crop of players during his time with Dubuque which has made the playoffs in every season under his watch. Dubuque players drafted by Larsson and subsequently drafted in the NHL include: Andrei Buyalsky, Matias Maccelli, Braden Doyle, Erik Portillo, Ryder Donovan, Patrick Kudla and Santeri Virtanen, among others.

Dubuque has seen over 95% of all players commit to Division I schools under Larsson's guidance. Academics have been a key focus for Larsson's teams. The Fighting Saints have had three of the last four USHL Scholar Athletes, and nine USHL All-Academic Team selections since the award's instatement in 2017.

Following the conclusion of the 2019–20 season, Larsson was named USHL General Manager of the Year after helping piece together one of the best teams in Dubuque hockey history. Larsson was responsible for drafting USHL Goalie of the Year Erik Portillo, USHL Forward and Player of the Year Riese Gaber, and three other All-USHL selections from that season's team.

Larsson joined the Fighting Saints from the Sioux City Musketeers, where he previously served as the club's Assistant General Manager and Director of Scouting. The Gothenburg, Sweden native joined the team late in the 2013–14 season and provided insight to the organization during two USHL drafts. In 2014-15, Sioux City finished in the top spot in the USHL's Western Conference.

Prior to joining Sioux City, Larsson was the Associate Head Coach at his alma mater, Lawrence University in Appleton, WI. Larsson played for Lawrence from 2003-2007, scoring 19 points in 22 games his senior season. Larsson returned to Lawrence as an Assistant Coach in 2010. He spent four years on the coaching staff of the NCAA Division-III program before joining Sioux City.

Larsson graduated from Lawrence with a double major in Government and International Studies, and a minor in History.

Larsson lives in Chicago with his family. 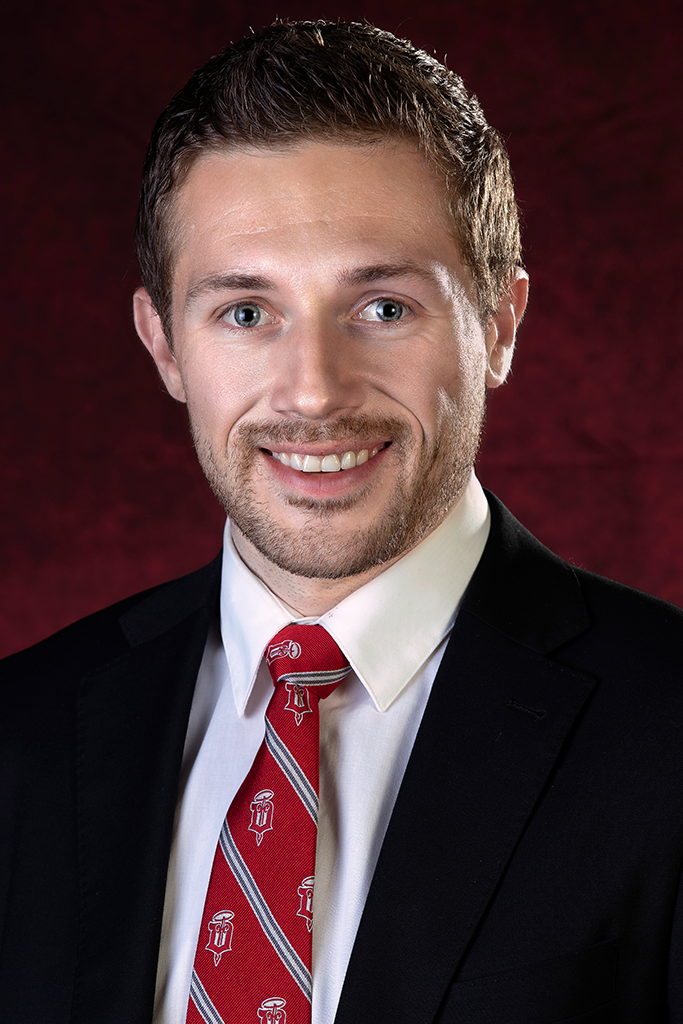 Evan Dixon completed his third season as assistant coach of the Fighting Saints and earned the promotion to Associate Head Coach ahead of the 2022–23 season. He originally came to Dubuque after coaching the previous two seasons at the University of Wisconsin - Stevens Point.

Dixon was on the coaching staff of the first unbeaten season in Division III men's hockey as the Pointers captured the program's sixth national championship in 2018–19. Dixon coached a pair of All-Americans in Connor Ryckman and Tanner Karty. He helped to lead the Pointers to a program record 31-game unbeaten streak and the fewest goals allowed (46) in program history.

In his first season as an assistant, Dixon helped the Pointers reach the Frozen Four and saw Karty earn WIAC Player of the Year honors.

He captained the 2016 UWSP team that captured the fifth national title in program history. That season, he was an Elite 90 Award winner and the WIAC Max Sparger Scholar-Athlete. As a member of the UWSP team, he led the Pointers to three-consecutive NCAA Title games culminating with the national championship in 2016.

Dixon skated in 117 games in a Pointer jersey over four seasons with 22 goals, 16 assists and 38 points. In his final three seasons at UWSP, Dixon was named to the WIAC All-Sportsmanship team. Following his senior season, Dixon went on to play professionally with the Fayetteville FireAntz of the Southern Professional Hockey League (SPHL). He scored seven goals and added 11 assists in 56 games in Fayetteville. 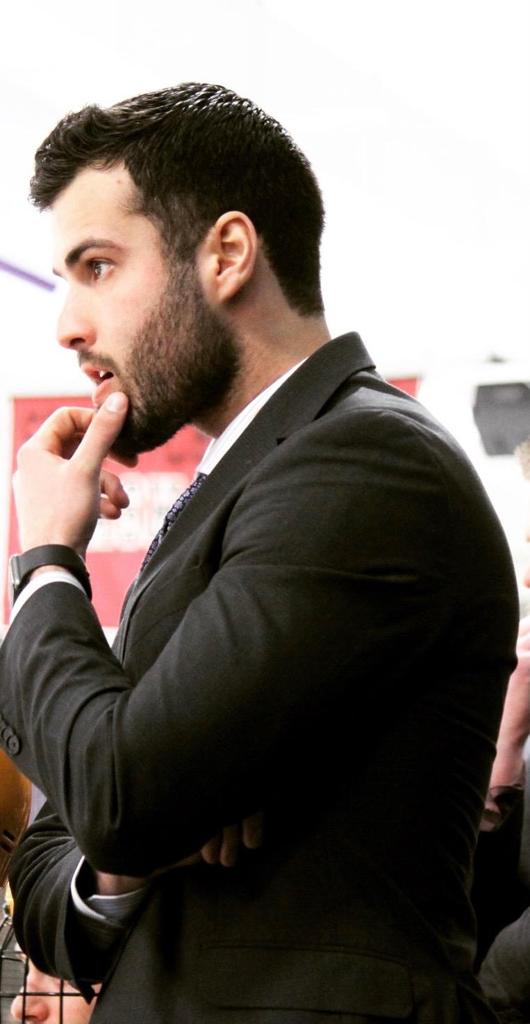 Zach Badalamenti enters his first season behind the Fighting Saints bench as an assistant coach in 2022-23. 'Bads' (Harrison Township, MI) will be entering the seventh season overall in his coaching career after spending the previous three seasons as an assistant coach for Trinity College (NCAA DIII) and the three seasons before that with UW - Stevens Point in the same capacity (NCAA DIII).

Badalamenti was a member of the Pointers coaching staff that made an NCAA Frozen Four appearance in 2016-17, and later won a National Championship in 2018-19. In that season, Badalamenti helped lead the Pointers to a program best mark of 29-0-2 that would stand as the program's first ever undefeated season.

Badalamenti, a graduate of UW - Stevens Point with a bachelor's degree in economics and management. is the third Pointer alumni to hold a position on the Fighting Saints' hockey operations staff.

As a player, 'Bads' was a product of the Little Caesars AAA program before spending four seasons playing junior hockey in the NAHL with four franchises. He finished his NAHL career with the Port Huron  Fighting Falcons, where he wore the 'A' as an assistant captain.

Badalamenti played two seasons of college hockey for UW - Stevens Point in 2014-15 and 2015-16. However, during the 2015-16 season, Badalamenti suffered a career-ending neck injury that led to his transition into coaching. 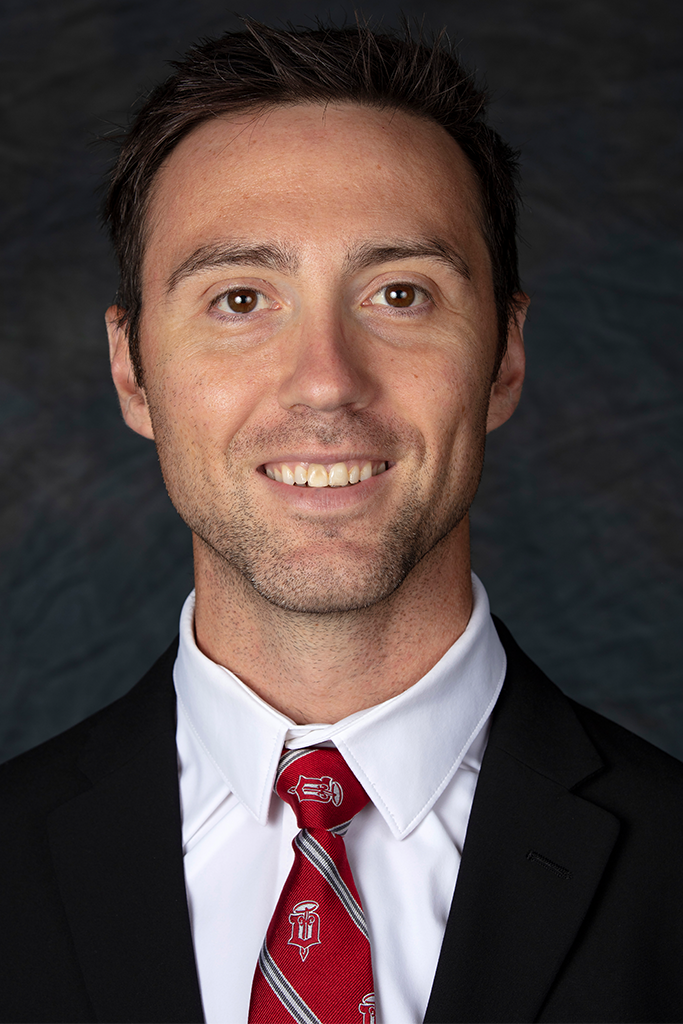 Peter Samargia completed his second season working with the Fighting Saints as the team's goalie coach. He previously coached in the USHL for seven years, most recently with the Des Moines Buccaneers. Over the years, Peter has coached 12 goalies to the Division 1 level from the USHL.

Peter is the Owner of Attitude Goaltending out of Minneapolis, Minnesota, where he has been teaching goalies for 18 years. Peter played two years for the University of Minnesota and two for Augsburg College.

Peter resides in Plymouth, Minnesota with his wife and three kids. He has a degree in Business administration from Augsburg College.

Justin Broy completed his first season as the Head Athletic Trainer of the Dubuque Fighting Saints. He joined the Saints after spending the past season as an intern with Boston College's hockey program.

The Maine native played his junior hockey with the Maine Wild of the NA3EHL, and played for the University of Southern Maine as a goaltender at the Division III level.

Broy is actively working towards a master's degree in rehabilitative science from Lasell University.

Alex Werner completed his first season as head equipment manager for the Dubuque Fighting Saints. He joined the Saints after four seasons working at The Fuel Tank at Fishers.

While there, he was the lead equipment manager and repair services at the ice facility for the past three years, and was in charge of concessions and ice operations. He was no stranger behind the bench in Indiana, as head coach of a local high school team for the past four years as well.

Werner is a 2013 graduate of The Art Institute of Indianapolis, with a degree in Culinary Management. 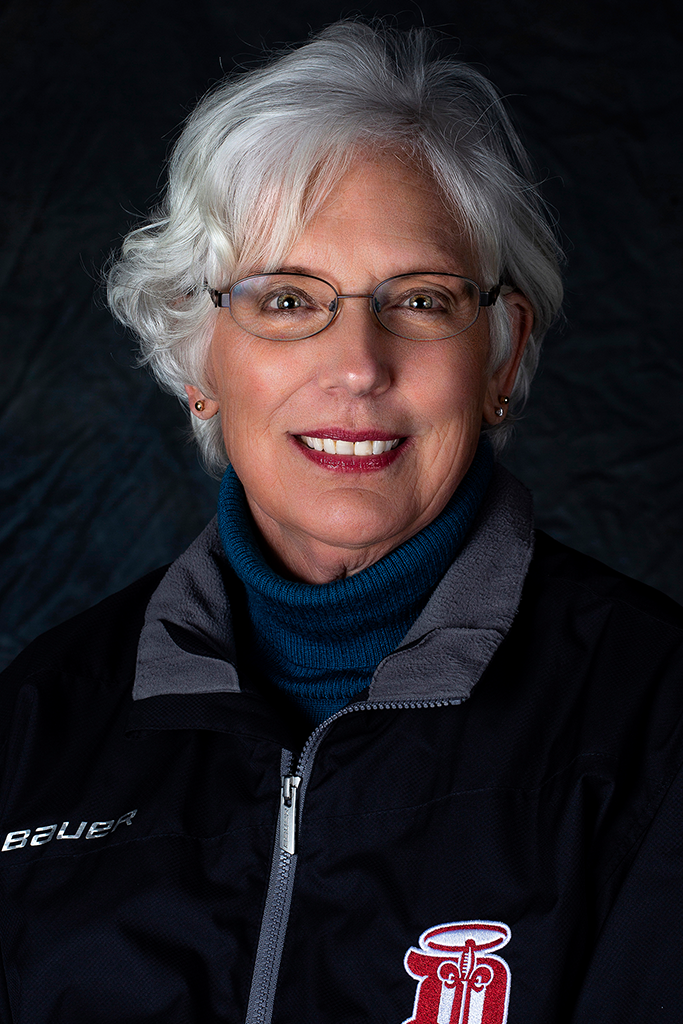 ​JoAnne Uthe-Gibson joined the Dubuque Fighting Saints in 2010 as the Education Coordinator for the team. Gibson received a Master of Arts in Teaching degree from the University of Wisconsin-Platteville. She taught at Dubuque Senior High School from 1975-2008 and is currently an adjunct faculty member at the Northeast Iowa Community College.

Gibson assists the players in preparing for the next level in their educational careers. She enjoys working with the Saints players to be academically ready when they leave Dubuque, whether they are in high school, or are taking online courses to prepare for college. 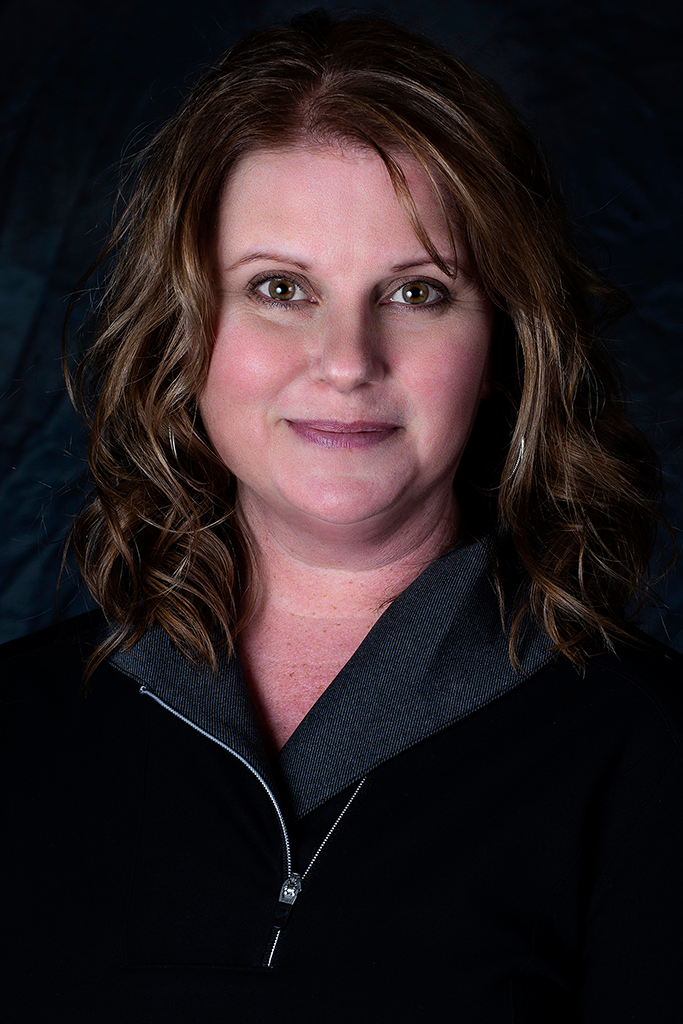 Amy Edwards, a billet since the 2013–2014 season, joined the Dubuque Fighting Saints in July 2018 as Housing Coordinator.

Through collaboration with coaches, billet families, players and their families, she is committed to facilitating a positive housing experience for all Dubuque Fighting Saints players.

Edwards is a native of Dubuque, graduated from Loras College with an Elementary Education degree, and resides in Peosta, IA with her husband, Doug, and children, P.J. and Mary.