Former UMass Lowell Associate Coach to be introduced at a press conference on Thursday, July 23

DUBUQUE, IA–The Dubuque Fighting Saints announced today the hiring of Jason Lammers as the team’s new Head Coach and General Manager. Lammers, 39, comes to Dubuque from UMass Lowell where he served as Associate Coach. He brings 15 years of coaching experience to the Fighting Saints and succeeds Matt Shaw as the third head coach in Dubuque history since the team’s return to the USHL in 2010. Lammers will be formally introduced to the media at a press conference on Thursday, July 23 at 12:30 p.m. at the Mystique Community Ice Center.

“I’m elated to be a part of the Fighting Saints organization,” said Lammers. “This was a great process and the organization’s pedigree and the people involved made this something I’m excited about. I’ve had a blessed career as college assistant and associate coach, but I felt the time was right to make this move. Dubuque is a wonderful city, and as we started to get further in the process, my family and I did more research, and the city fits our values, people seem to love living there and it’s an elite organization.”

Lammers joined UMass Lowell’s staff in 2011 as an Assistant Coach. He was promoted to Associate Coach in 2012, a role in which he coordinated the River Hawks recruiting efforts and specialized in coaching the team’s defensemen. During his tenure on Head Coach Norm Bazin’s staff at UMass Lowell, Lammers helped guide the River Hawks to three NCAA Tournament appearances, including a trip to the Frozen Four during the 2012-2013 season. Additionally, the team claimed back-to-back Hockey East Tournament Championships in 2013 and 2014. Four former River Hawks coached by Lammers have already dressed in the NHL, including Minnesota Wild defenseman Christian Folin and goaltending prospect Connor Hellebuyck of Winnipeg.

"The pool of candidates gets more impressive each time we conduct a coaching search,” said Brad Kwong, Managing Partner of Northern Lights Hockey, LLC. “This is a testimony to the USHL and its development model.  Jason emerged from the pool as a coach that we believe will help keep the Fighting Saints successful on the ice, while also being someone who will take great care and pride in developing our players on and off the ice.  His impressive track record at UMass Lowell preceded him, but once we got to speak to him, we knew he was our guy.  His coaching philosophy, management style, personality, and probably most important, his character, are what made him the candidate for us. "

Lammers also spent three seasons at Ohio State University from 2006-09, helping the Buckeyes to an NCAA Tournament appearance in 2009.

He began his coaching career in 2000 as a volunteer assistant with Clarkson University where he returned as a full-time assistant coach in 2002 after a stint with Hobart College. He spent one season as an assistant coach at the University of Alaska-Fairbanks during the 2003-2004 campaign on the staff of current Penn State coach Guy Gadowsky. He followed Gadowsky to Princeton University for the 2004-2005 season.

Lammers graduated from SUNY-Geneseo in 1998 after a four seasons as a member of the school’s D-III hockey team. The defenseman earned All-SUNYAC 2nd Team honors during his senior season in which he served as the team’s captain. He returned to his alma-matter as the Head Coach of the Knights for the 2005-2006 season where he posted a 19-2-2 mark, leading the team to a SUNYAC Tournament victory and an appearance in the NCAA Tournament.

Lammers played three seasons of professional hockey following his collegiate career. He skated for the Idaho Steelheads of the West Coast Hockey League for two seasons with a stint with the Phoenix Mustangs in between. With Phoenix, he helped the team to a Taylor Cup Championship.

Dubuque’s new Head Coach and General Manager will move to Dubuque with his wife Michelle, son Rhett, 6, and daughter Bryn, 4.

Lammers becomes the third coach in club’s history since the return to the USHL. He follows Matt Shaw, who accepted an Assistant Coach position with the University of North Dakota in June. Shaw spent two seasons in Dubuque, leading the Fighting Saints to a pair of Conference Final appearances and a Bronze Medal at the 2013 Junior Club World Cup in Omsk, Russia. Jim Montgomery, now the Head Coach at the University of Denver, served as Dubuque’s Head Coach and General Manager from three seasons from 2010-2013, leading the team to a pair of Clark Cup Championships.

“You get in this business because you want to win, and I’m incredibly competitive,” said Lammers. “At the same time, hockey is a vehicle to develop people to leave with an experience in Dubuque they love. There has been a high bar set in Dubuque, and that’s intriguing to me. With quality of the people there, I’m excited to chase a championship.”

A press conference to introduce Lammers will be held on Thursday, July 23 at 12:30 p.m. at the Mystique Community Ice Center. Fans are encouraged to attend the press conference. Food and drinks will be served to media members following the event. 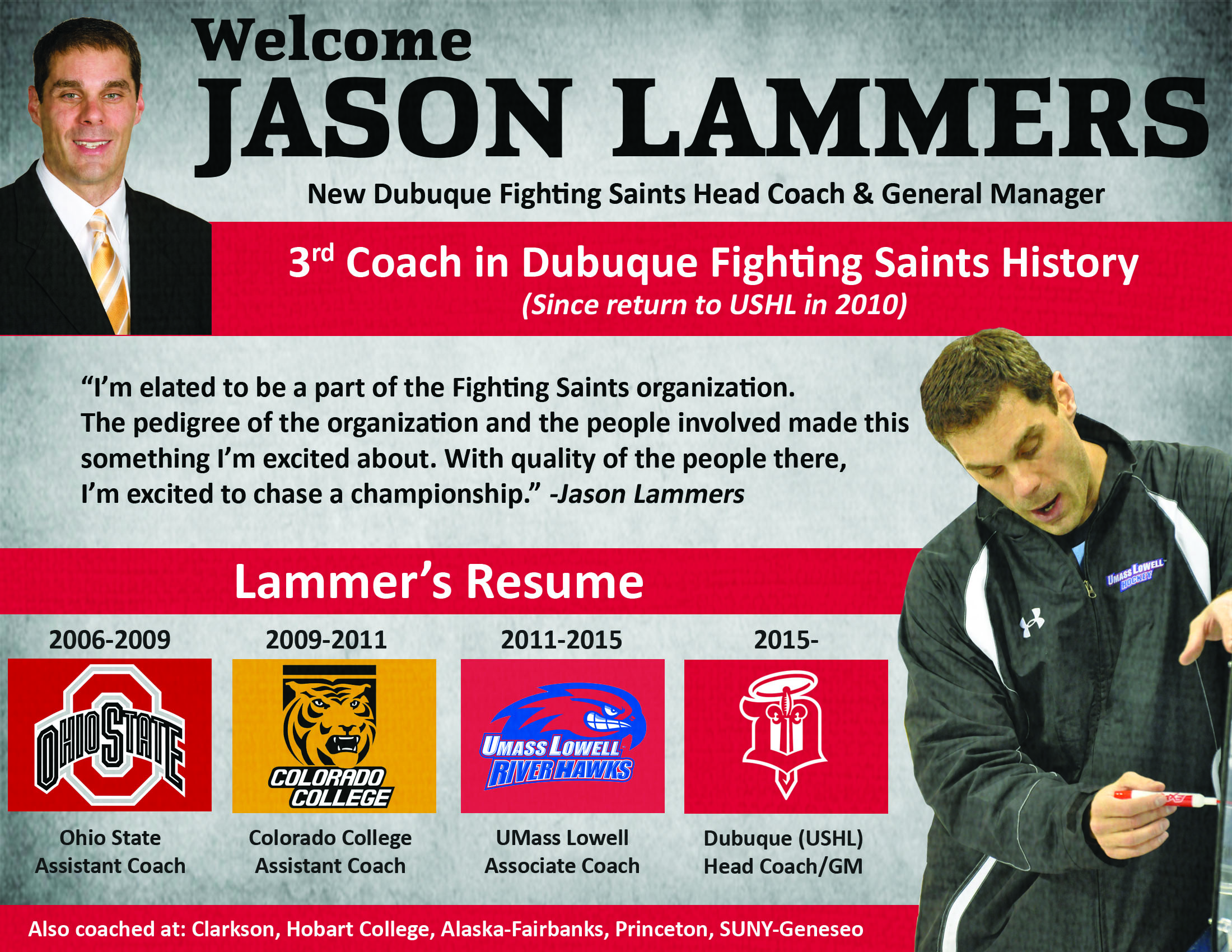