Few teams in the USHL can boast the success of the Dubuque Fighting Saints over the last five seasons. This past season of Fighting Saints hockey continued the winning tradition and provided thousands of fans in Dubuque may reasons to cheer during the 2014-2015 campaign. While the club came up just short of it's ultimate goal of winning a Clark Cup Championship, there were still many moments to celebrate.
Dubuque finished the regular season with a 36-19-5 record, good for 3rd Place in the Eastern Conference. The team posted a 7-5-0 record against rivals Cedar Rapids and Waterloo, claiming the rivalry series Prairie Farms Cowbell Cup for a third time in the past five seasons.

Dubuque also set a new team attendance record. In a victory over Cedar Rapids on February 7, the Fighting Saints welcomed 3,545 fans to the Mystique Community Ice Center, the most to ever watch a hockey game in Dubuque's history.
The Fighting Saints once again qualified for the Clark Cup Playoffs this past season, making them the only club in the USHL that has clinched a spot in the postseason for the past five seasons. Dubuque also advanced to the Conference Final for a third straight season, and for a fourth time in five years. Dubuque has won a playoff series in each of the club's five seasons in the USHL since returning to the league in 2010.
Dubuque opened the postseason with a matchup with rival Cedar Rapids. The Fighting Saints swept the series, 3-0, claiming a 6-3 win on home ice in Game 1 before winning a pair of games on the road in Cedar Rapids. This marked the second straight season Dubuque knocked Cedar Rapids out of the playoffs.
Dubuque and Muskegon met in the Eastern Conference Final with the Lumberjacks taking the best-of-five series, 3-2. After the teams split a pair of games in Dubuque and Muskegon, the Lumberjacks held off a Dubuque comeback to earn a 4-3 victory in the deciding Game 5 of the series.
Below are many of the highlights from the 2014-2015 season. 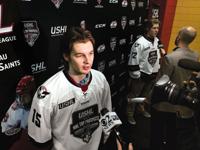 The eyes of the hockey world were on Dubuque, Iowa on January 13, 2015. The Fighting Saints hosted the 2015 USHL/NHL Top Prospects Game, which was a showcase of the USHL's top NHL Draft eligible players. The event was a giant success as over 3,000 fans from all over the world attended and scouts from all 30 NHL teams were in attendance.

The event culminated two days of events, including a Top Prospects Luncheon in which Stanley Cup Champion and NHL broadcaster Eddie Olczyk was the Keynote Speaker.

Arguably the Fighting Saints MVP in the 2014-2015 season, goaltender Jacob Nehama went from a player on a tryout to one of the league's top goaltenders. After being promoted to the Lincoln Stars during the 2013-2014 season, new management decided to release Nehama last summer. He was invited to Dubuque's training camp as a Free Agent looking to compete for a spot on Dubuque's roster.

His strong play in the preseason earned him one of the two spots, and the goaltender went on to rewrite the Fighting Saints record books. Nehama posted a club record 29 victories, going 29-13-2 in 48 appearances. He had the most wins in the USHL, finished second in goals against average with a 2.31 mark, and led the league in minutes played with 3618. He had a .913 save percentage and two shutouts for Dubuque.

The netminder's strong play earned him a scholarship to Colorado College. He also won five postseason games for Dubuque, posting a strong 2.13 goals against average in eight games.

Seamus Malone saved his best season for last. The third-year Fighting Saint posted a career best 26 goals and 32 assists for 58 points during the 2014-2015 campaign. For the second straight season, Malone, who will play for Wisconsin next season, was the club's leading scorer. He was an alternate captain for the Fighting Saints this past season, and won a Gold Medal at the Junior A Challenge with Team USA in December. Malone also added 10 points in 8 playoff games. He finished his USHL career 55 goals and 76 assists for 131 points.

Just minutes before the USHL's trade deadline, the Fighting Saints finalized two deals that brought two marquee players to The Key City. Dubuque obtained defenseman Hayden Shaw, the son of Head Coach and General Manager Matt Shaw, from the Waterloo Black Hawks, and added scoring forward Robby Jackson from Chicago. Both players would make giant impacts for the Fighting Saints and help lead the team to the Conference Final.

Shaw, who is headed to North Dakota next season, had a pedigree as being one of the USHL's top offensive defenseman when he came to Dubuque. He continued his strong play with the Fighting Saints, scoring 13 points in 14 games, including notching a pair of game-winning goals. He was Dubuque's leading scorer in the playoffs, scoring an amazing 12 points in just 8 games from the blue line.

Jackson, the reigning USHL Rookie of the Year, provided Dubuque with scoring punch down the stretch. Paired with Seamus Malone and Jacob Benson, Jackson scored 3 goals and added 13 assists for 16 points in 15 game with Dubuque. He'd add three more assists in the playoffs. The St. Cloud State commit was an instant fan favorite for his shifty play and out-going attitude.

Players Scheduled to Advanced to College Hockey Next Season

Take a look back at the 2014-15 Season, and watch some of the best highlights as Dubuque made the playoffs for the fifth season in a row.